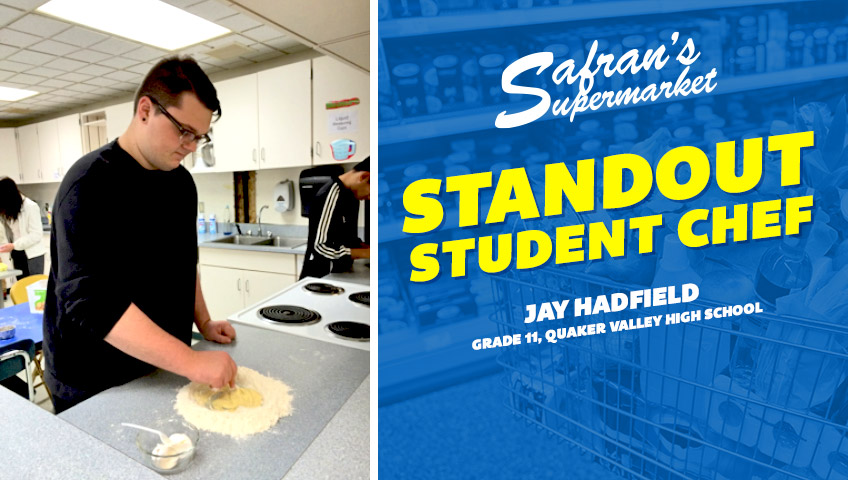 Jay Hadfield has been selected as Safran’s Standout Student Chef of the month!

Jay is a Junior (Grade 11) at Quaker Valley High School and has been selected due to his passion for cooking fresh, flavorful dishes. He began cooking when he was 3 years old and attributes his love for cooking to his mom (who keeps a bountiful garden) and his Gram.

Culinary Speaking, His Motto Is:
Eat everything (once)

Other Students Describe Jay’s Cooking as:
– “Over the top”
– “Chef like”

Beat together eggs and milk until smooth, then soak both sides of bread. Cook in a nonstick pan until both sides are browned and no longer soggy; will still be soft, but shouldn’t be dripping or too wet to the touch.

While the bread cooks, combine honey, ginger, and juice from the half of a lemon. Grate zest from the lemon half into the mixture (not much; shouldn’t take more than the lemon half can provide).

Remove toast from the pan and drizzle with the sauce. Freshly whipped cream and/or powdered sugar are great additions, however not necessary.

We're in This Together!

In this unprecedented time, we know that you are counting on us and we are working around the clock to remain a trusted source of much-needed resources and supplies. We will continue to approach everything day-by-day and will do our best to keep you informed on our hours of operation and overall efforts via our Facebook page.